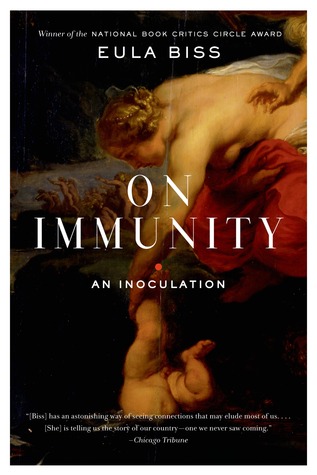 This book is a collection of essays from the author’s perspective as a doctor’s daughter and a mother. It informs the reader about immunity, viruses, history of some diseases, clinical trials and vaccination. It also explains the concept of herd immunity and the process involved in finding a vaccine for a disease. All these are very relevant to the current crisis of coronavirus.

Yet, this book does not focus on hard science alone. It talks about the metaphors we use to describe disease and immunity and how that influences our thought process about them. It sheds light on how the healthcare system impacts, as well as gets impacted by politics, economics, morality and prejudice.

I like how the author references books by professionals to back up her scientific claims and occasionally quotes fiction or recounts her own experience when she focusses on philosophical grey areas.

Here are some quotes that will serve as food for thought:

“Wealthier countries have the luxury of entertaining fears the rest of the world cannot afford.”

“Debates over vaccination, then as now, are often cast as debates over the integrity of science, though they could just as easily be understood as conversations about power.”

“Our fears are informed by history and economics, by social power and stigma, by myths and nightmares. And as with other strongly held beliefs, our fears are dear to us. When we encounter information that contradicts our beliefs, as Slovic found in one of his studies, we tend to doubt the information, not ourselves.”

“That so many of us find it entirely plausible that a vast network of researchers and health officials and doctors worldwide would willfully harm children for money is evidence of what capitalism is really taking from us. Capitalism has already impoverished the working people who generate wealth for others. And capitalism has already impoverished us culturally, robbing unmarketable art of its value. But when we begin to see the pressures of capitalism as innate laws of human motivation, when we begin to believe that everyone is owned, then we are truly impoverished.”

“For toxicologists, “the dose makes the poison.” Any substance can be toxic in excess. Water, for instance, is lethal to humans in very high doses, and overhydration killed a runner in the 2002 Boston Marathon. But most people prefer to think of substances as either safe or dangerous, regardless of the dose. And we extend this thinking to exposure, in that we regard any exposure to chemicals, no matter how brief or limited, as harmful.”

“Purity, especially bodily purity, is the seemingly innocent concept behind a number of the most sinister social actions of the past century.”

“While we routinely call for more vaccine testing, and more human trials, the unspoken assumption is that we do not intend our children to be the subjects of those trials.”

“If we imagine the action of a vaccine not just in terms of how it affects a single body, but also in terms of how it affects the collective body of a community, it is fair to think of vaccination as a kind of banking of immunity. Contributions to this bank are donations to those who cannot or will not be protected by their own immunity. This is the principle of herd immunity, and it is through herd immunity that mass vaccination becomes far more effective than individual vaccination.”