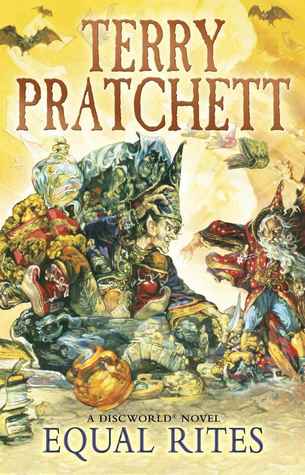 Equal Rites is the third book in the Discworld series and the first one in the witches series. The story starts off with a dying wizard passing on his power to the newborn Eskarina Smith without knowing that she is a girl. The only people who witness this are her father and the midwife, Granny Weatherwax, who also happens to be a witch. They decide to keep quiet about it because wizardry is the wrong kind of magic for a girl.

There was no written rule, of course, but it was the general consensus that only men became wizards. If women had the potential to use magic, they became witches. In the words of Granny Weatherwax, “Wizard magic is all about books and stars and jommetry She’d never grasp it. Whoever heard of a female wizard? Witches is a different thing altogether. It’s magic out of the ground, not out of the sky, and men could never get the hang of it.”

So Esk is brought up like a normal young girl without the mention of magic. Then one day something happens that stirs up the magical power inside her and Granny Weatherwax tells her about her birth secret. She decides to take Esk under her wing and train her in witchcraft instead of wizardry because she is a girl. She explains that wizardry is not greater than witchcraft, although wizards seem to think that theirs is the only kind of magic worth practising.

After months of training in witchcraft, Esk asks Granny to teach her something advanced. One thing leads to another and Granny realizes that Esk must be trained in Wizardry to control her power. She then takes her on a journey to Unseen University where they train wizards. Whether she succeeds in getting into the Unseen University against all odds and becomes the first female wizard forms the rest of the story.

I liked how gender issues are portrayed in this book. Starting from the title of the book which is a play on “Equal Rights”, to the characters to the expectations of society, Sir Terry Pratchett has captured the real-world issues of gender discrimination in his magical world of Discworld.

Like many girls, Esk starts off questioning gender roles. She isn’t satisfied with being a witch when she has what it takes to be a wizard. But when a wizard subtly belittles witchcraft, she stands up for it. She then decides to be both, a witch and a wizard, just like many girls/women who want to do it all.

Her experiences while trying to get to the Unseen University make Esk doubt whether it is possible for a girl to step into the wizardry world, which is a man’s land. Since society expects boys to seek fortune and girls to seek boys with fortune, she wonders that perhaps girls don’t have fortunes to seek.

She almost decides to give up even before reaching the university, which is common for many girls in the real world. Fortunately, Granny’s guidance and her inner spirit make her fight on.

Speaking of Granny Weatherwax, her character growth was quite heartwarming. She reminded me of some women from my mother’s and grandma’s generation who originally believed in the stereotypes and expectations of society but went on to change their minds as they encountered spirited young girls. She went from “this is how it has always been, so we’re going to follow tradition” to “why does it have to be this way?”

At the beginning of the book, she hid the fact that Esk has the powers of a wizard and trained her to be a witch because that is the natural thing for a girl. By the end of the book, she was arguing with a wizard for Esk’s sake and questioned where it was written that women cannot be wizards.

On the whole, this story felt very familiar and relatable even though it is a fantasy. Granted, I can’t fly on broomsticks or cast a magic spell, but I could relate to what the characters go through on an emotional level. So many dialogues in the book were very similar to what we hear on a daily basis. Even the magical terms were worded such that you don’t have to think twice to understand what real-world concept is being referred to. Eg: jommetry could refer to geometry.

I loved the wit in Sir Terry Pratchett’s writing. You never know what to expect in his descriptions.

The storm walked around the hills on legs of lightning, shouting and grumbling.

The scene is the blackness of deep space with a few stars glittering like the dandruff on the shoulders of God.

It was the kind of storm that suggests that the whole sky has swallowed a diuretic.

There were many interesting dialogues, but this one caught my attention:

She told me that if magic gives people what they want, then not using magic can give them what they need.

I’m pretty sure I’m overthinking here and this may not be what the author meant at all, but I think the word magic here can be replaced by money. We can buy whatever we want with money but things that matter and the things that we need cannot usually be bought. If this really is what the author meant, then it adds another layer to the gender roles theme of the story since traditionally men earn money and women take care of the household.

Overall, I’d highly recommend this book. Although this is the third book in the Discworld series, you can read this book without reading the first two since they feature different characters.

Have you read any book in the Discworld series? What are your favourites? Let me know in the comment section below!